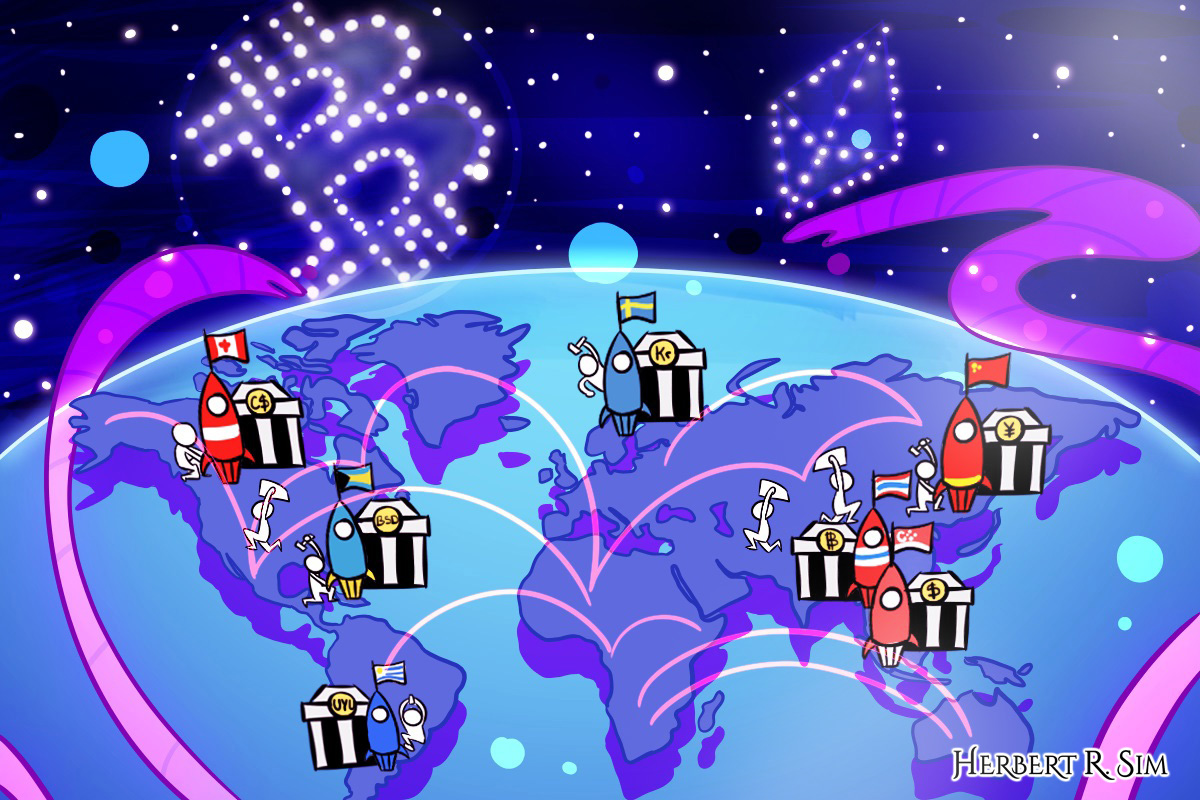 Here is my final illustration “Central Banks Worldwide Race To Launch Own Digital Currencies”, inspired and drawn in a ‘Rick and Morty‘ illustration style. The human figures scurry around building their rockets to launch, alongside the central banks.

Several central banks in different countries are considering implementing some form of Central Bank Digital Currency (CBDC). Uruguay has reportedly launched a CBDC pilot program already, while the Bahamas, China, Canada, Sweden, Eastern Caribbean Currency Union and Ukraine are “on the verge” of testing their systems.

The global consensus is strengthening for digital currencies to be developed as officials from prominent institutions raise their case for the new form of payment. Governor of the Bank of England, Mike Carney, has argued the case for digital currencies to be implemented across financial systems and positioned as the de facto global digital alternative. Carney says with the support of a large group of prominent nation-states, this new digital alternative would help to unlock dollar funds that governments currently hoard as an insurance policy in uncertain times.

Closer to Asia, the Bank of Japan has been exploring the technical aspects of a digital currency in collaboration with the European Central Bank. Deputy Governor Masayoshi Amamiya warns should an “e-yen” replace the current Japanese yen, central banks must heighten security measures to preserve the safety of assets and personal data.

In Sweden, China and Canada, private sector players are taking over the payment systems. In Sweden and Canada, cash transactions are down by 20% and similar digital resurgences are also concentrated in China. While China is not the first to push for a digital currency, it is the first to do so with the backing of the central bank.

Here we weigh some of the implications for central banks and the overall impact on key threads of the global economy.

Is it feasible for central banks to issue their own currencies?

Issuing their own digital currency, would prevent a central bank from losing significant market share to bitcoin and this would make it easier for a central bank to pursue negative interest rates. The flipside is, huge issues could be created during a financial crisis if there is a panic withdrawal from traditional banks and with funds transferred to the central bank.

Central banks till date have not launched their own cryptocurrency till now due to concerns over households and private companies without access to risk-averse central bank funds. This is a likely scenario should cash be displaced.

The scepticism from central banks is based on our historical experience says with private money issues. They haven’t often turned out particularly well. Now in fairness, it’s really hard to assess the historical data, because there’s so much going on, the interaction of regulations with the private money provision.

It’s in addition very hard to tell sometimes whether it’s the private provision of the money supply that should be criticised vis-à-vis the underlying regulation that prevents it from operating well, but by and large there’s just this intuitive feel based on the data.

The so called free banking era in the United States ran from about 1836 to 1863 and here we see a copious amount of monies issued by thousands of different banks and the system functioned well. By some measures it functioned relatively well, but there’s just a great inconvenience of having these different private monies coexisting circulating this counterfeiting problem.

Giving the financial landscape an overhaul and ease in transactions

Digital currencies and other payment innovation can make domestic and cross-border transactions quicker, reduce the costs that come with each transaction  and ideally give the unbanked such as poor and rural households in Africa, Central Asia or Latin America, access to the financial system. Benoit Coeure, member of the Executive Board of the European Central Bank, says in an interview with the Economist, “Certainly, payment systems are going to become much more efficient. In China, in India, one can conduct very small micro-transactions with street vendors using payment systems that have been decentralised and that are intermediated, not through the traditional banks but through other platforms. And one can see this very easily catching on.”

The impact that digital currencies could pose for the monetary system are fatal and irrevocably damaging.

The existence of the digital currencies could mean the monetary system may become more fragmented. The economic logic of networks and platforms means they have an incentive to maximise user numbers and a tendency to evolve into closed systems. They may create “digital currency areas” where participants are kept together because they share and exchange the same type of digital money.

The Financial Times argues that as digital money is naturally cross-border, it opens the way to new forms of currency competition, from Libra among others. Governments from selected states may attempt to use digital payment networks as a way to internationalise their currencies, to a more visible recognition. However, others may face the penetrating risk of “digital dollarisation”, with an onslaught of foreign currencies in their domestic economy. This could lend detriment in reshaping the international monetary system.

Would this decision from central banks be a perfect opportunity for Bitcoin to thrive?

The issue that is ongoing among nations adopting digital payments while eliminating cash is privacy – the operative word. If one takes a closer look at the social credit system in China, it is easily envisioned for a future where urban citizens will be closely scrutinised, with their financial transactions determining their social score and eligibility to access services, job vacancies and housing applications.

Andreas Antonopulos, a Bitcoin educator and expert across forums and financial associations, has likened this to a violation of free speech. Antonopulos argues that money is a language, and that making certain transactions illegal or cutting people out of infrastructure is a growing issue in today’s society. As Rob Paone, a cryptocurrency personality and founder of Proof of Talent, said, “going cashless means a financial surveillance state.”

Government surveillance, of course, can theoretically protect citizens from criminals. But, as crypto researcher Hasu and Three Arrows Capital’s Su Zhu argued in an opinion-editorial on digital cash, “The specters of terrorism and organized crime are often cited [as justifications for survillence]. But this makes the naive assumption that governments itself [sic] can never become evil.” The duo write that cashless societies are less, not more, susceptible to tyranny, overreach, and authoritarian policies.

A surveillance state such as China is exactly where Bitcoin shines. Right now, most public blockchains can be mined for data. Analytics companies can weave a healthy ecosystem of data around transactions, and identify the points at which one “doxes” themself. 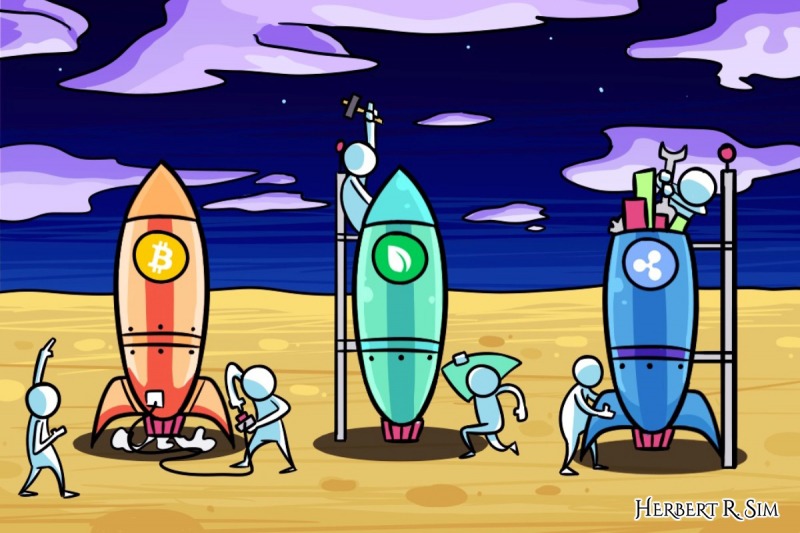 This was my initial illustration sketch, that I decided was too mundane, and decided to work on a slightly more complex one, inspired by ‘Rick and Morty’ science-fiction sitcom as seen above.

China as a potential leader in global digital currency

Unlike decentralised blockchain-based offerings, the PBOC’s currency is intended to give Beijing more control over its financial system. With the drawn out trade war with the United States and instability brought on by the Hong Kong protests, it would be a worthwhile pursuit to see if the digital currency introduction will give China a much needed boost in its pursuit to be the world’s formidable economic and tech superpower.

The path ahead for digital currency

With governments in deadlock and blockchain technology still waiting to prove its mettle, the path ahead for digital currencies remains uncertain. Should the sizeable global economies pursue digital currencies, it can pave a new era of speed, traceability and security.